This week, the quidditch world was rocked by the tragic news of Antwerp QC announcing that they will no longer exist as a club with immediate effect. Guest writer Nick De Leu (Player & Coach for Ghent Gargoyles and player with the Belgian Gryffins- the Belgian national team) reflects on Antwerp's influence on European quidditch at the end of their 7 year existence while also taking into consideration various perspectives on the Dodos' legacy from prominent figures in the European quidditch community.

The end of Antwerp QC was a bombshell for European Quidditch. The generation that claimed EQC 2017 and formed the core of a Belgian squad that earned silver at World Cup 2018 is calling it quits, and there are no successors to continue the franchise. But the team will be remembered for more than their medals.

They were a joke. That’s an important thing to remember about the hard hitting, relentlessly evolving quidditch machine that turned into EQC winner and double silver medalist Antwerp Quidditch Club. First as the Belgian Beerters, later as Deurne Dodos, the squad started out as a ragtag band of high school friends, football buddies and scouts. It was a 17 year old Louis Lermytte who had read about quidditch in 2013 and thought: "I bet we could do that". It turned out: they could.

In Belgium, the Antwerp team was quickly joined by the more formal Brussels Qwaffles, who later formed the base of the Belgian Quidditch Federation. Tanghi Burlion, one of the early Qwaffles members, vividly recalls their first encounters with what would later grow into one of the powerhouses in European quidditch. "Every time we faced each other in a friendly, they would beat us by 100 points: that’s how much more athletic they were in a fledgling Belgian quidditch scene. But back then, they weren’t very familiar with the rules yet, which had an impact on competitive, reffed games. Qwaffles ended up winning the first Benelux Cup, but mostly because Dodos were playing one player down due to cards for almost all of the game. Once they got the hang of the rules, we could never beat them again."

Despite their tender age, they quickly impressed on the international stage. Team Norway veteran Elisabeth Jørstad, who played for Oxford University's Radcliffe Chimeras at Antwerp’s first EQC in 2014, recalls a 15 year old Seppe De Wit scoring 16 goals at that tournament. "They were really good for being so young. But they were also keen to improve, with a couple of people in important positions who took the time to think about tactics and watch footage. By the time they made the quarters at EQC 2015, I don’t think anyone was surprised anymore."

Elisabeth Reyniers, who joined the club that year and grew into one of Europe’s star beaters since, experienced that evolution from the inside. "In the beginning, we were just teenagers who wanted to have fun. We played pretty much without structure, which sometimes left me without a real job on pitch. That quickly changed, especially as we started winning more."

Reyniers describes Gallipoli 2016, where Dodos lost their first EQC final to Paris Titans, as a turning point. "We claimed silver against our own expectations and then started training twice a week. That turned into three times a week by the time EQC 2017 in Mechelen rolled around. Keeping that consistency with a core squad that stayed the same throughout the years was really time consuming, but it also greatly benefited our play."

Even more than the medals, their play style is a big part of Antwerp QC’s legacy. It led Team Germany mainstay Leander Troll to refer to the team as ‘Idols of the quidditch world’, in a reaction to the announced end of the team. "They shaped what players all over Europe think is the ideal of beautiful, amazing and strong quidditch."

Others praise Antwerp’s tactical advances. "The Dodos pioneered the 2-pass offense, generating high percentage opportunities that were also much prettier to watch than most of their competition", assessed Team UK linchpin Lucy Quidditch. "Their speed and game awareness made complex passing plays look deceptively simple, and this especially showed in their fast breaks." That show factor cannot be underestimated, according to four time EQC winning Paris Titans coach Albert Bregault. "Playing against the Dodos was always playing against a large part of the crowd: that’s how beautiful their game was."

The Titans-Dodo’s rivalry dominated much of European Quidditch over the past four years, with Antwerp claiming their one EQC victory in the year Titans were eliminated by NTNUI. Still, Bregault keeps fond memories of the matchups. "In all of our matches, Dodos were able to take a time out when their backs were against the wall, and they turned the game around. That’s a quality of true champions. It was definitely the best rivalry I experienced across my entire sports career, but we also had a common objective: to push European Quidditch towards the level of the world’s best."

That competitiveness also worked within the team, says Hanne Porres, who played for the Antwerp team in two EQC finals. "I was never a driven sportswoman, more of a casual player. That meant I was often unsure and afraid of making crucial mistakes in a hyper focused team. But once we were at a tournament, everybody wanted to help each other to achieve greatness: that enthusiasm was infectious."

Porres describes how a ‘joke team’ got more serious year after year, ramping up training intensity long before tournaments, with players taking care of their diets and fitness levels, and practices increasingly focused on the A team. "But for an unpaid sport, that effort to remain at a high level was getting simply too time consuming", coach and star player Louis Lermytte admits. "A couple of core players wanted to do other things with the remaining part of their 20s. EQC and World Cup 2020 were supposed to be our last hurrah. When those events were cancelled, it accelerated the process."

Generational change is a given with every sports team. For some, like one time powerhouse Oxford's Radcliffe Chimeras, waiting for a new generation of stars can take a long time. Others, like Norway’s university-fed NTNUI, manage to turn themselves into a conveyor belt for talent. But for Antwerp, the franchise ends with their most talented generation - their B team had already called it quits before 2020.

"The constant competitiveness and high level at practice made it hard to implement new recruits", says Lermytte. "That started out as an unintentional side effect, but eventually we prioritized achieving results with our core squad. Even if that meant preferring to bring back retired talent like Faust Eeckhout for important tournaments over developing new players. Yes, that was a short term decision, but if the talent is there, you have to shoot your shot."

Maybe the retirement of an entire team runs counter to their long time motto ‘Exctinction can’t stop us’. But with a plethora of cups and medals on their resume, Dodo’s definitely did shoot their shot. Even if they did start out as a joke: they turned out to have one hell of a punchline.

Popular posts from this blog 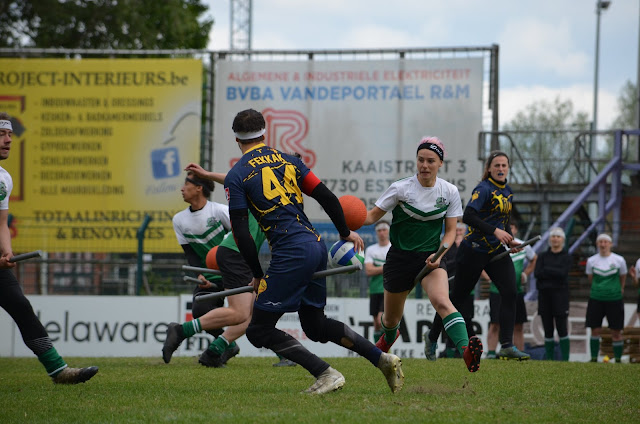 Firstly, apologies for the lack of content, I'm aware it's been a LONG time since I've published an article. The plan is to get back to producing at least one per month but as always, I can't promise anything.

So, to get things going in 2020, I thought I'd take a look at one of the biggest matches of 2019 in European quidditch. Rivalries are undeniably what makes sport so compelling and in quidditch they don't come much bigger than the one between Titans Paris and Antwerp QC A. The two sides have faced off against each other on multiple occasions over the past few years not just as themselves but also as France and Belgium respectively with their players making up much of the core of both national teams. With both teams topping their groups after Day 1, sadly they were fated to meet prematurely in the quarter final rather than meeting in the EQC final like they did in 2016 and 2018. Considering the Titans contingent have overall domin…
Read more 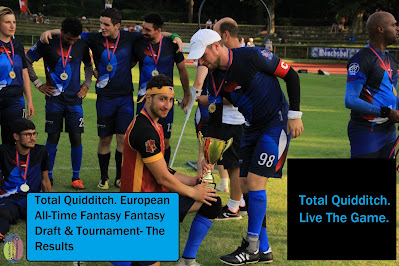 Here we are, at the end of a project that started back in mid-July. 8 General Managers (GMs) drafting 8 teams of the best talent in European quidditch history. 5 weeks of drafting to form a 16 player roster with 1 captain and 1 coach per squad. 128 players total from 17 different countries. Only one 1 winner. As you can see, numbers are going to be a key feature of this piece. It's the moment of truth, the time to reveal the results of the Public Vote, Judges Vote and combined scores to determine the winner of this European All-Time Fantasy Fantasy Draft & Tournament. Before we jump into it, it's worth reminding you how the voting works. The final result is determined via a Public vote (accounting for 45% of the teams' final scores) and a Judges vote (accounting for 55% of the teams' final scores). The judging panel consists of 11 judges- 3 independents and 8 team judges, the team judges only ranked the other 7 teams in order to maintain impartiality, in the same f…
Read more 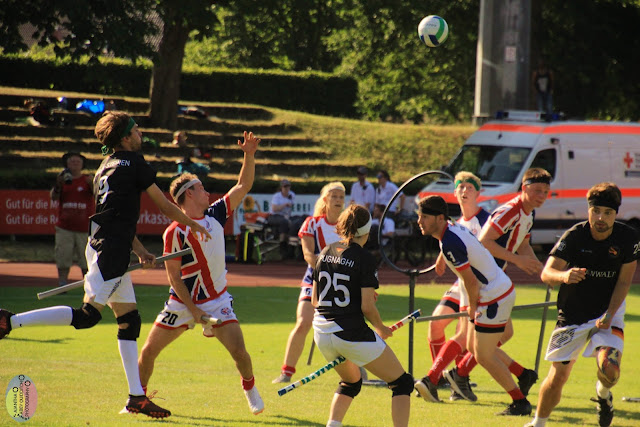 While the world is under Coronavirus lockdown and sadly no quidditch is currently being played, let's revisit one of the games from 2019's European Games in Bamberg, Germany. Honestly, European Games 2019 isn't a tournament I've really given much thought about since it happened. I was away at summer camp in the US at the time, almost entirely unplugged from the outside world so mentally I feel very disconnected from it but I guess now is as good a time as any to dive into some of the game footage available online. Special shout-outs to my friends Amund and James (UK coach for this tournament) for requesting this article, I hope they enjoy it just as much as the rest of you. Remember, if you would like me to do analysis on a specific game, please leave a message in the comment section here or on the facebook page (with a url link to the footage) and I will take it into consideration.

Of the matches I've watched, this is one of the more entertaining ones…
Read more